Here is this week’s installment of “Five Faith Friday” which contains five faith-based things I found interesting and am sharing on Friday.

What Article I’m Reflecting On —

“A Pandemic Observed. What mourning my husband and son taught me about the fear of death.” This devout Christian mother shares her story of losing her pre-born child followed a few weeks later by the death of her husband. Her meditations on death are profound and her correlations to what we are dealing with from a fear perspective related to covid-19 hit close to home. Make some time to read her story. It’s well worth it.

Fatima. This is arguably one of the most powerful stories outside of those contained within the Bible and now being brought to the “big screen.” It has been released today and is available both in theaters but also available on all of your typical streaming sources (i.e., Amazon Prime, Google Play, Apple TV, etc.). Here is a great reference related to requests of Our Lady from Fatima. The first one stands near and dear to my heart… pray the rosary daily! And this article from Jimmy Akin is a wonderful summary of Fatima itself.

My rosary. Yes, the rosary is a weapon and you should consider keeping it on you and praying it regularly. I always have a rosary in my left pocket, locked, loaded, and ready for battle. Need a rosary? The Combat Rosary is by far my favorite rosary that I own (fun fact: it’s used by the Pontifical Swiss Guard too!). There is one video that stands out above all others in terms of properly illustrating the powers of the rosary. We watched it during one of our Pints & Prayers get togethers but here it is again for anyone who wants to watch it. It’s 57 minutes and one that I have watched multiple times. It’s that good.

Abby Johnson’s remarks at the Republican National. Put politics aside and listen to her words on abortion. She is such an incredible witness to the faith and also to the evils associated with abortion. Her conversion from pro-abortion to pro-life coincided with her conversion to the one true faith – Catholicism and she hasn’t looked back ever since. It’s only 4 and a half minutes long, but a wonderful testimony on the evils of abortion. And how about the former army doctor turned nun, Sister Deirdre “Dede” Byrne and her 4 minute speech: “I’m not just pro-life. I’m pro–eternal life.”

Which Audio Clip I Heard —

“If I Were the Devil” by Paul Harvey.  This 3 minute audio clip was recorded way back in 1965 but it is fascinating to see how much of it is true today. Who is Mr. Paul Harvey? Paul was an American radio broadcaster. He broadcast News and Comment on weekday mornings and mid-days, and at noon on Saturdays, as well as his famous The Rest of the Story segments. Paul Harvey News was carried on 1,200 radio stations, 400 Armed Forces Network stations and 300 newspapers. His broadcasts and newspaper columns have been reprinted in the Congressional Record more than those of any other commentator. 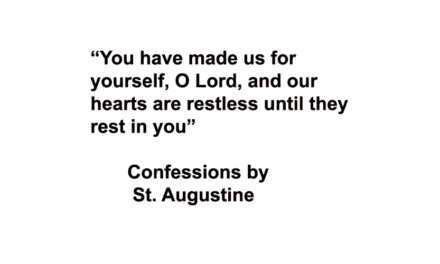