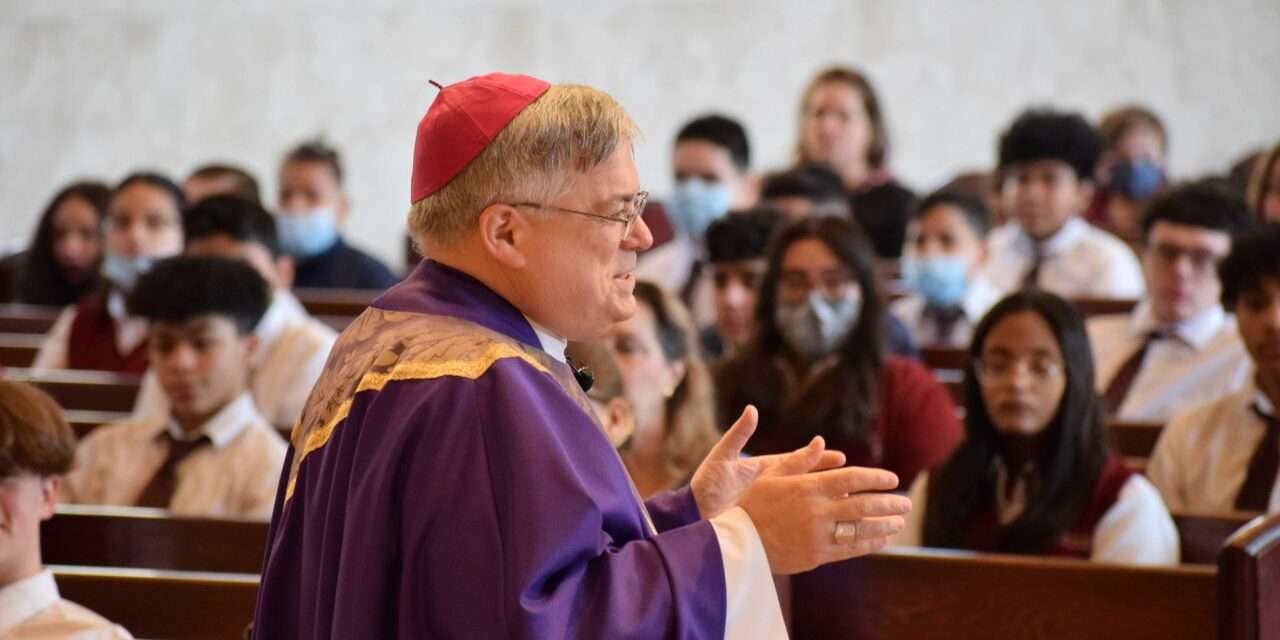 It was five years ago today, Aug. 31, 2017, that Bishop Alfred Schlert was installed as Fifth Bishop of Allentown.

Taking his seat for the first time on the marble Bishop’s chair at the Cathedral of St. Catharine of Siena, before a packed crowd of bishops, priests, religious men and women, and the faithful, he became the first priest from the Diocese to be named its shepherd.

Bishop Schlert returned to the Cathedral altar today, to quietly celebrate the regular 8 a.m. daily Mass, an understated way to mark his anniversary and to thank God for His many blessings.

During the first five years of Bishop Schlert’s leadership, he has worked with clergy, religious and lay people to enhance the spiritual lives of Catholics in the Diocese, bringing graces to the faithful and to the community in general.

Bishop Schlert also has responded to many difficult events and challenges: a global pandemic that upended normal life in parishes, schools, and homes; financial stress on the Diocese that required difficult decisions; and the clergy abuse crisis and the Pennsylvania Grand Jury Report, which demanded clear leadership, transparency, accountability, and continued commitment to keeping children safe.

Here is an overview of the key events of the past five years:

Bishop Schlert called for the celebration of the Year of the Real Presence, which just recently concluded, to bring focus on the Real Presence of Jesus Christ in the Holy Eucharist – Body, Blood, Soul, and Divinity.

Under his leadership, parishes increased schedules for Confession, and for Adoration of the Most Blessed Sacrament. There also were increased opportunities for prayer, especially prayer for vocations to the Priesthood and religious life.

Bishop Schlert created the Commission for Young Adults, and appointed a Bishop’s Delegate to the Hispanic Community to help serve the growing number of Spanish-speaking Catholics in the Diocese.

Bishop Schlert enhanced the role of lay people, especially women, in the leadership and pastoral programs of the Diocese. He also oversaw the work of lay leaders, parishes, religious men and women, and clergy during the Synod of Bishops, in which Catholics from all walks of life were invited to make comments on their Church and their faith. Two hundred Synod Ambassadors from parishes around the Diocese helped gather comments, and thousands of people participated.

Bishop Schlert, along with the clergy and faithful, celebrated the 60th Anniversary of the Diocese’s founding, remembering the moment in 1961 when Berks, Carbon, Lehigh, Northampton, and Schuylkill counties were separated from the Archdiocese of Philadelphia to create the Diocese of Allentown.

He travelled to Rome, along with other Pennsylvania Bishops, for a meeting with Pope Francis, to report on the state of the Diocese, and to pray at the tombs of the Apostles Peter and Paul. Such pilgrimages strengthen a Bishop’s responsibility as a successor of the apostles, and reinforce his hierarchical communion with the Pope, who is the successor of Peter.

Most recently, Bishop Schlert set the tone for the Diocese’s response to the U.S. Supreme Court decision that there is no constitutional right to an abortion. He commended the Justices for their courage, he spoke of the robust support the Church provides for women and families, and he invited anyone who has had an abortion to seek Reconciliation through the Sacrament of Confession, and to be embraced by the love and forgiveness of Jesus through the ministry of the Church.

In March 2020, with the Coronavirus spreading rapidly, Bishop Schlert joined the other Bishops of Pennsylvania in lifting the obligation to attend Mass, and later that same month in suspending public participation in the Mass to keep people safe. At the same time, Bishop Schlert directed that Church buildings would remain open for private prayer and that sacraments would still be available during the pandemic. Meanwhile, diocesan schools shifted to remote learning.

As parishes geared up their online Mass offerings, Bishop Schlert began livestreaming his morning Mass in his private chapel, and would continue doing so – preaching directly to the faithful watching on AD Today, on YouTube, and on Facebook — for 88 straight days. About 10 weeks after the suspension of public participation, Masses around the Diocese were reopened to the public. Diocesan schools became leaders in the education community in returning to in-person learning.

With regard to the clergy abuse crisis, Bishop Schlert advocated releasing the Pennsylvania Grand Jury Report to the public at a time when others were arguing that it should be kept private. Before the Report was released, Bishop Schlert had already directed the publication of a list of diocesan priests credibly accused of abuse of a minor. He created a new diocesan leadership position to improve prevention and safety, he provided millions of dollars for victim compensation, he improved transparency and accountability, he convened a meeting of county District Attorneys and enhanced the Diocese’s partnership with law enforcement, and he offered “Healing Our Church” in parishes to garner comments and questions, then held a series of six public meetings to answer questions from the faithful – one in each region of the Diocese and one conducted in Spanish.

Bishop Schlert enhanced screening for candidates to the seminary, enacted a zero-tolerance policy for those accused, issued a personal pledge of accountability, and oversaw a robust system of background checks and training for adults and youth. He worked to rebuild trust in the Church, while reminding the faithful that the overwhelming majority of priests in the Diocese are good and faithful servants who have never been accused.

In the belief that victims of abuse should receive compensation as one aspect of their healing, Bishop Schlert authorized a program of borrowing, spending of cash reserves, and sales of unused land. The Independent Reconciliation and Compensation Program would eventually distribute $16.02 million to 97 victims. These activities put the Diocese under severe financial stress, requiring difficult financial decisions. The Diocese announced work force reductions in 2019 and 2020, eliminating more than 50 jobs. He also directed the posting of a financial transparency page on the Diocese website.

In addition, Bishop Schlert streamlined the Diocese’s administrative structure, organizing it around his three main pastoral priorities: Education, Formation, and Evangelization of the Laity at every stage of life; Clergy and Vocations; and the Charitable Works of the Church and Youth Protection.

On the day he was installed, Bishop Schlert, now 61, recalled that it had been almost exactly 30 years ago that he was ordained a priest at the same Cathedral altar. He selected as his Episcopal Motto, “Feed My Sheep.”

Before he became a bishop, while he was serving as pastor of St. Theresa of the Child Jesus Parish in Hellertown, then-Monsignor Schlert composed a mission statement calling on the parish to be:

“A Roman Catholic family of faith, centered in the Holy Eucharist, faithful to the Church’s teachings, bringing the light of Christ to each other and to our community.”

Today, that is Bishop Schlert’s Mission Statement for the Diocese of Allentown. With God’s grace and a continued collaboration by many, it will continue bearing fruit for the people of Schuylkill, Northampton, Lehigh, Carbon, and Berks counties long into the future. 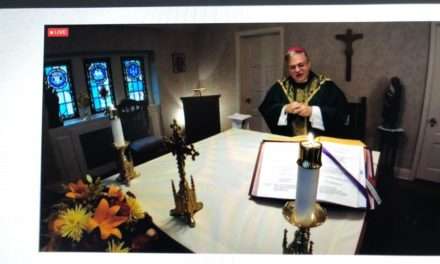 Forgiveness and Fidelity Are the Keys to Marriage, Bishop Says at Annual Wedding Anniversary Mass 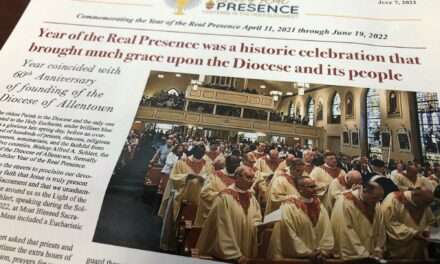 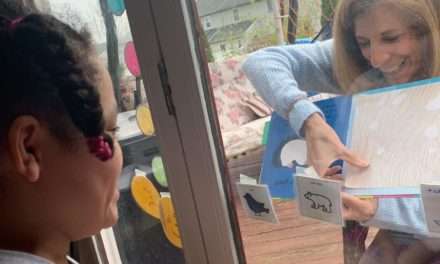 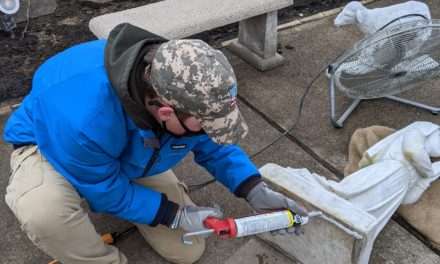