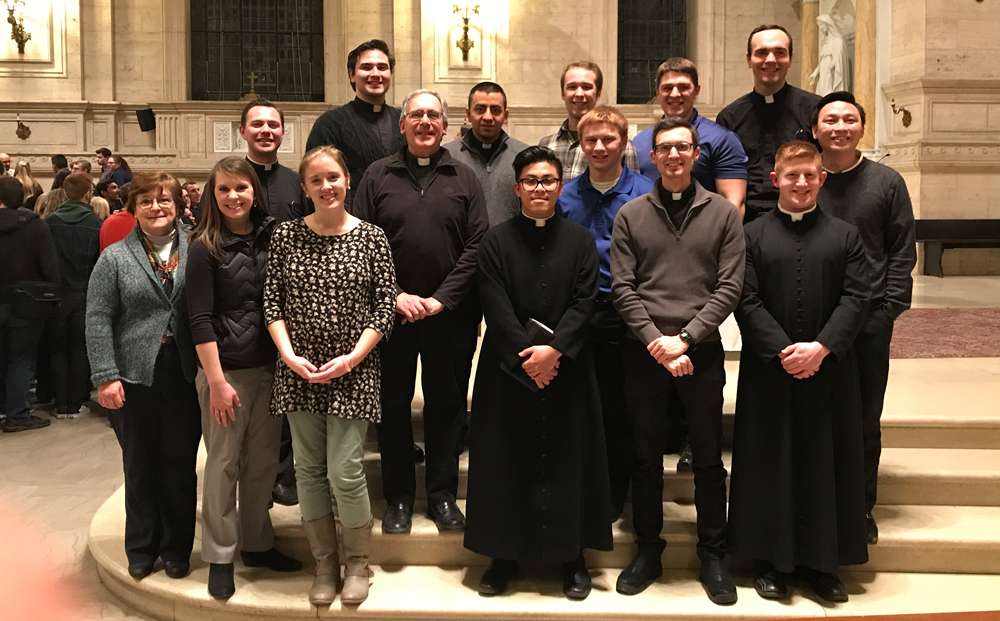 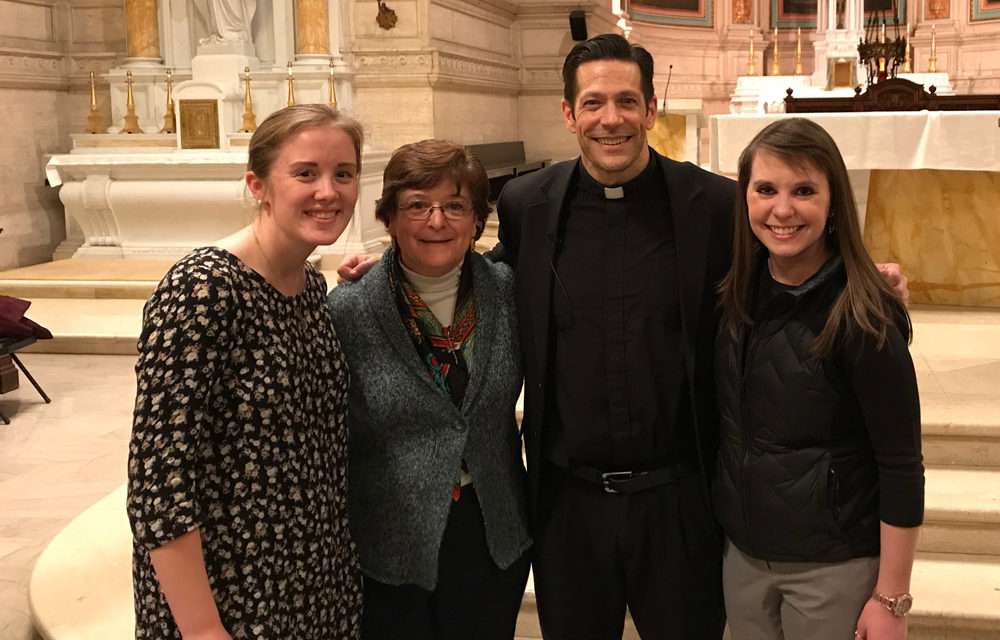 By Alexa Smith, Diocese of Allentown

More than 700 faithful descended upon St. Charles Borromeo Seminary on Jan. 27 for the Cardinal Foley Lecture on The Church and Social Communications, part of an annual series that began in 2011 in memory of the late John Cardinal Foley. Among the attendees gathered in St. Martin’s Chapel were 14 seminarians preparing for priesthood in the Diocese of Allentown. This year, the keynote speaker was Father Mike Schmitz.

Ordained in 2003, Father Schmitz wears many ministerial hats, but may be best known for his YouTube videos on the Catholic faith, which have amassed more than 309,000 subscribers and garnered over 1.9 million views. Through his channel, Ascension Presents, Father Schmitz discusses everything from why we fast during Lent to how to discern a vocation, and he has gained national recognition for his approachable yet orthodox content on the faith.

“Evangelization is about telling stories,” Father Schmitz said. “The heart of the kerygma [gospel message] is telling true stories about Jesus and what he has done, but also about what he has done in your life and in mine.”

A powerful force on social media, Father Schmitz is skilled at spreading the Gospel message to the masses, but he reminded his listeners that evangelization is not always about having the largest platform.

“You never have to wait for permission to do good, you just need to get started,” he said. “We’ve already been given a commission. We’ve been baptized and told what to do, to go out into all the world and make disciples of all nations.”

Father Schmitz emphasized that we never need to wait to share the Gospel, to help someone, or to reach out to someone.

“God wants to use people who make themselves available,” Father Schmitz said. He explained that it is not necessarily about having big plans, a strategy, or a vision for how a new idea will play out. “I love those kinds of people, but I’m not one of those people. I just like to say yes.

Father Schmitz explained that his reach in ministry started small, extending only to the college campus where he was assigned to serve as Newman Center Chaplain. One day, a student approached him and asked if he would be willing to record some of his homilies. “I said no,” he shared. “I said ‘I don’t know how to do that.’ ”

Undeterred, the student offered to handle all the technology, and made a compelling argument that it would be beneficial for the students on campus to hear from their spiritual father. Father Schmitz agreed, and the student began recording his homilies.

“People always ask, ‘How do you become a Catholic speaker?’ I tell them, ‘You get baptized, and then you start talking.’ ”

The next step in Father Schmitz’s journey came when a father and son, who had been listening to his recorded homilies, asked if they could make a compilation of his sermons related to the Eucharist. This time, Father Schmitz said yes.

“Then, I had brought a group of teens to a Steubenville Youth Conference, and the celebrant for one of the Masses couldn’t make it, so they asked if I would preach,” he said. “I said yes.”

When Steubenville asked Father Schmitz to return the following year to preach again, he said yes to that too. And Father Schmitz said yes again when Ascension Press asked if he was willing to be part of a new catechetical DVD program, writing just two or three of the lessons and appearing in the series.

“Then, when someone from Ascension asked if I wanted to make short, five to seven minute videos for YouTube, because the young people are living online, I said yes,” he said. “And that’s how I got here tonight.”

When teachers, youth ministers, and catechists approach Father Schmitz to thank him for his online content, which they show to their students to supplement their lessons, Father Schmitz turns it back on them.

“I tell them, ‘I have the easy job – I get to sit in my living room, press record, press upload. The only reason it works is because you’re there, willing to get into the messiness of people’s lives, getting teens to trust you enough to let you help them, because at some point in your life you saw the need and you responded.’ ”

Though Father Schmitz is clearly comfortable on social media, he still has rules to keep him grounded as he navigates the world of virtual communication. “Rule number one, I’m not a celebrity,” he said. “I’m a priest.” Father Schmitz shared that whenever he’s nervous about a speaking engagement, his mother gently reminds him that the real star is Jesus, not him.

The second rule Father Schmitz lives by on social media is that he is not there to share his random thoughts with the world. “I would be looking for something that I should not be seeking, for some kind of affirmation or response” he said. “I guard against any attempt to inflict my hit-and-run opinion on people.”

Finally, Father Schmitz is not interested in commanding the attention of his followers with a constant online presence. “I don’t tweet a lot, I don’t post too much, because if I did, it would be an attempt on my part to be a constant part of people’s consciousness,” he expressed. “They have other things to think about, and I don’t need to give my heart to strangers when I can give my heart to the people living right within my midst.”

While Father Schmitz has made great strides spreading the Gospel message with new media, he believes that the heart of evangelization does not require expensive cameras or high tech devices. “How do we evangelize with the new media?” he asked. “We don’t, if we’re not willing to evangelize without the new media.”

Not surprisingly, Father Schmitz receives many letters and messages from those who have stumbled upon his online work who are intrigued by the Catholic faith and want to go deeper.

“I hear from people all the time who grew up in other religious traditions, or who are atheist, and they want to become Catholic,” he said. “They ask me where they should go and what they should do next.”

He explained that when these conversations occur, it is his duty to point these individuals to the closest Catholic parish in their neighborhood.

“When that person shows up at the parish, what’s going to happen?” he asked. “Who are they going to meet? Is someone at that parish going to be willing to welcome them and tell their story?” 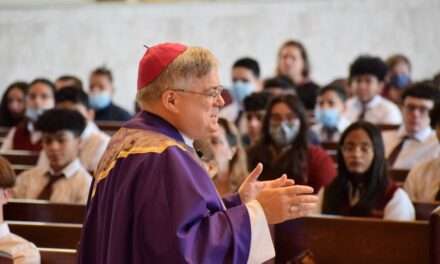 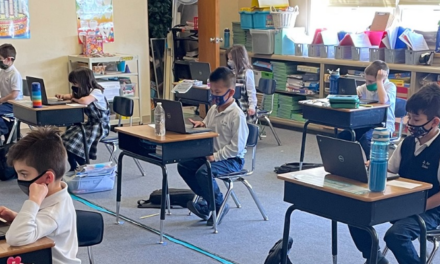 The Pandemic Caused Many Students Nationwide to Fall Behind, but Not in Allentown Diocese Catholic Schools 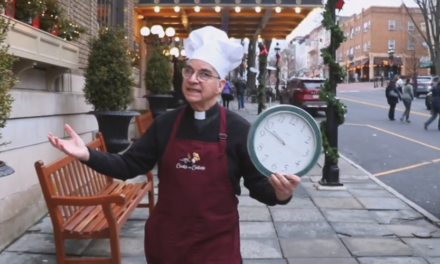 Cooks With Collars is Back, and Wait Until You See What Our Priests are Making