What Book You Need to Read —
“Priest and Beggar: The Heroic Life of Venerable Aloysius Schwartz” by Kevin Wells. Bishop Strickland, Bishop Daly, Father Calloway, Father John Hollowell, and Father Jonathan Meyer all have provided positive editorial reviews of the book. Kevin Wells is one of my favorite offers (stay tuned: book club upcoming on “The Priests We Need to Save the Church” book by him) and the story tells the incredible life of a (future) Saint who has probably had the largest impact on the world with the least amount of acknowledgement. This is a binge-worthy book that you won’t regret reading.

What Article Was Interesting to Read —
“Archbishop Cordileone Confronts Pelosi Over Receiving Communion.” While we can never judge a person’s soul due to a lack of visibility to that individual’s consent and knowledge of their actions, we can acknowledge their actions and recognize that they are wrong. When a public figure takes a drastic position (e.g., agreeing that it is okay to murder over 800K babies per year in the U.S… by the way, there have been slightly under 600K covid deaths in the U.S. since covid became a thing – to give you a sense of the magnitude), and proceeds to present themselves for Holy Communion, they commit a particularly grave form of sacrilege (according to Cardinal Raymond Burke). He says, “The reception of Holy Communion by those who publicly and obstinately violate the moral law in its most fundamental precepts is a particularly grave form of sacrilege. In the words of the Catechism of the Catholic Church, “Sacrilege is a grave sin especially when committed against the Eucharist, for in this sacrament the true Body of Christ is made substantially present for us” ( CCC 2120). It not only merits eternal punishment for the one who receives unworthily but constitutes a most serious scandal for others, that is, it leads them into the false belief that one can publicly and obstinately violate the moral law in a grave matter and still receive Our Lord in Holy Communion. A thoughtful person, before such a situation, must conclude that either the Sacred Host is not the Body of Christ or that the promotion of procured abortion, for instance, is not a grave sin.” Remember, as Saint Paul taught in the First Letter to the Corinthians, “Whoever, therefore, eats the bread or drinks the cup of the Lord in an unworthy manner will be answerable for the body and blood of the Lord.” (1 Cor 11:27 NRSVCE). If you are in a state of mortal sin, don’t receive the Blessed Sacrament… it will do you more harm than good.

What News is Exciting —
Last week I mentioned the “Texas Heartbeat Bill” that was making its journey towards becoming a law. Well guess what? It’s official! And on top of that, “the Supreme Court announced earlier this week that it will be taking up a case that has the potential to scale back or even overturn Roe v. Wade. However, overturning Roe v. Wade would not lead to abortion being illegal in every state. Abortion SHOULD be illegal in every state, but that’s not what would happen as a direct consequence of Roe v. Wade being overturned if it ever was.  All that would happen is that each state would be empowered now to make its own laws on the issue. This is a situation that even a pro-abortion person, if they were honest (and I’m not sure any such creature exists), should prefer.  You can be in favor of legal abortion while still recognizing that Roe v. Wade was a bad decision. The justices managed to locate a “right” to abortion in the Constitution, even though no such right is ever mentioned or hinted at.  They found it within the right to privacy, which ALSO is not mentioned in the Constitution. If you’re keeping track at home, that is two degrees of separation from the Constitution.” The court will hear the case in the fall and a ruling will most likely be expected in 2022. Experts suggest that Roe v. Wade will be overturned.

Which Article I Enjoyed —
“Meet the Nun Who Wants You to Remember You Will Die” featuring Sister Theresa Aletheia. To give you a sense of who she is, here is a tweet from her: “Day 455 with a 💀 on my desk: Everyone dies, their bodies rot, and every face becomes a skull (unless you are incorrupt). This is the jarring reality. And with Christ, this reality is imbued with hope. #mementomori.” It brought back memories of an article I shared last fall that people sent a lot of positive feedback about: “A Pandemic Observed: What mourning my husband and son taught me about the fear of death” from a traditional Orthodox mother who lost her (priest) husband and son.

Which College is Setting a Great Example —
Benedictine College in their fight against pornography addiction. You can read the article to get a sense of what they are doing in the holistic battle for souls, but Benedictine College is setting a great example for what higher level Catholic education should be – authentically Catholic. While many Catholic colleges are Catholic in name only (e.g., Notre Dame, Georgetown, Villanova, etc.), there are still a few out there that refuse to compromise on the faith. Which ones are still Catholic through and through? Check out this list.

Five Faith Friday: What If they Don’t Come Back? 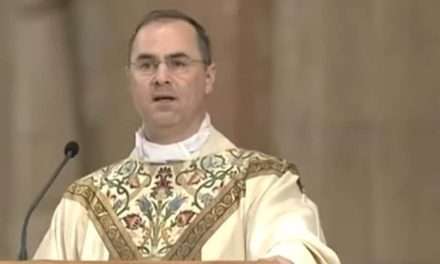