St. Martin of Tours, a Champion of Charity and Reconciliation

I noticed my AD Times article was to appear on the 11th of November, the Memorial of St. Martin of Tours (ca. 316-397). Then one night, while leading a session of Bishop Robert Barron’s series on the Eucharist, I spotted in the video some images of St. Martin of Tours Chapel at my alma mater, St. Charles Borromeo Seminary, Philadelphia. The following morning, a daily quotation email corroborated my decision to write about him here.

The phrase “da robur, fer auxilium” (“give strength, give help”), from St. Thomas Aquinas’ hymn “O Salutaris Hostia,” strangely materialized in the relief of my writer’s block. If this hymn had been around a millennium sooner, Martin (from Mars, Roman god of war) might have sung it often.

Raised in a military family and drafted at age 15, he “lived more like a monk than a soldier” (Butler’s “Lives of the Saints”). Both monastic and military contexts (contests!) require divine assistance.

Perhaps the best-known tale of St. Martin of Tours is his encounter with a lightly clad  beggar on a cold winter’s day. Taking pity on the man, Martin unsheathed his sword, sliced his cloak and gave the severed portion to the beggar. In a dream that night, Martin learned that the beggar was Jesus Himself. At the time he was still a catechumen; but he was well on the Way, and this experience hastened his steps toward the font.

St. Martin’s soldiery continued until the age of 20, when he refused bounty from a victorious fend-off of the Gauls. To the emperor he declared, “I have served you as a soldier; let me now serve Christ.” When accused of cowardice, Martin asserted he would stand unarmed at the front of the next day’s battle line and was sent to prison. An armistice eventually freed him to follow through on his discipleship under the future St. Hilary, Bishop of Poitiers.

Martin sought straightaway to become a hermit, but others soon followed him into that way of life. His monastery has survived until today, except for a 250-year hiatus. People knew Martin’s holiness and clamored for him to be made Bishop of Tours, even tricking him into the ceremony by feigning a sick call that of course he would promptly answer.

Even as a bishop, Martin continued his attractive monastic manner, purifying his territory of pagan influences and effecting physical healings. He acted as a peacemaker in his dealings with a heretical sect, and later wondered whether he had been too lenient. He faced his final days with willingness to continue his apostolic labors while accepting God’s will.

The quotation I had received the other day, from Russell Moore, speaks of the Church as “the outpost of the kingdom of God, where we are in a training pattern toward eternity with one another.” Moore cites Luke 3, where tax collectors and soldiers ask John the Baptist, “What do we now do?” The Church responds by shaping “our consciences … to know how to use power responsibly.”

In every phase of his life St. Martin of Tours, champion of the Church Militant (or, as I have come to call it, the “Church Persevering”), used his power for charity and reconciliation. To that end, Lord, “da robur, fer auxilium!” 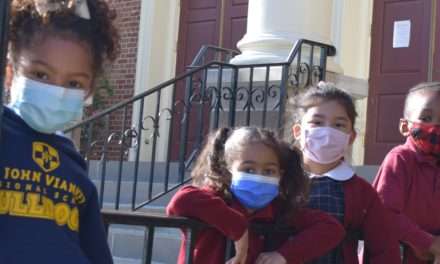